Press conference on “Updating the Sundarbans situation in the perspective of UNESCO decisions 2017” was held in Dhaka Reporters Unity (DRU) on March 18, 2019. National Committee for Saving the Sundarbans (NCSS) organized the event.

Sultana Kamal, the Convener of NCSS, presented the written statement while the press conference was moderated by Dr. Mohd. Abdul Matin, the General Secretary of BAPA and Member Secretary of NCSS. Sharif Jamil, Joint Secretary of BAPA and Coordinator of Waterkeepers Bangladesh, Professor Badrul Imam and Professor Abdul Aziz of Dhaka University spoke among others during the press briefing and answering the questions of journalists there.
Sultana Kamal in her written speech said that national resources like the Sundarbans was under the highest threat of destruction due to River erosion and climate change, Storm surge, Shrimp cultivation and permanent waterlogging, Wildlife poaching, deforestation, poisoning the water bodies for fishing mismanagement by forest department, destructive development and reckless industrialization. Destructive development activities and reckless industrialization in and around the Sundarbans that were triggered due to the inception and construction of Rampal Power Plant, a 1,320 MW coal based power plant is going on ignoring all environment laws, policies and declarations by Bangladesh, India and the United Nations; Bangladesh and Indian governments have expressed strong determination to set up this huge power plant and have continued the work while there are local and international protests. Internationally recognized independent scientists analyzed the Tender Document of the plant and they projected the possible irreversible harm the plant would cause to this UNESCO world heritage site. 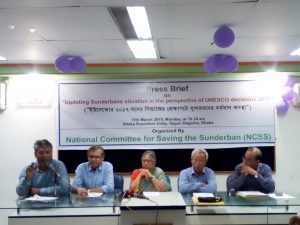 In the 41st meeting of UNESCO World Heritage Committee (WHC), all the red category industries including the Rampal were criticized and some specific instructions like conducting a Strategic Environmental Assessment (SEA) of the entire southern western region of Bangladesh before proceeding on to construction of any large scale industrial establishment, to mitigate damages to the forests area, ensuring adequate safety measures for shipping and Environmental Impact Assessment (EIA) before dredging the river Pashur, to carry out necessary to study about the potential impacts of local air and water pollution, navigational transportation, dredging, and more freshwater withdrawal due to the coal power plant. WHC asked to complete those studies before the SEA of South-western region.
It revealed in the press conference that the meeting of UNESCO World Heritage Committee this year (2019) is supposed to assess the implementation status of their decisions by the state party. According to the decisions and timelines Bangladesh should have submitted a report already and NCSS requested to the government of Bangladesh to provide them a copy of the report. The written statement also said that NCSS gave a letter to the UNESCO WHC to update them about the situation in the ground and asking for the state party report to review the government efforts to protect the outstanding universal values of the world heritage property.